Penis size is a fact, what matters is a judgment.

Does penis size matter?  Objectively, it has a numerical value that can be plotted on a Bell curve which means most men are clustered in the center gradually declining on either side of average.  There is a concentration of measurements between 5 and 7, gradually thinning at the 4’s and 8’s, plummeting down to 3’s and 9’s.  Men are overly sensitive when it applies to their own dot in the matrix. 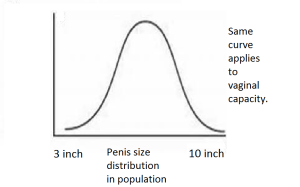 Why don’t we talk about what a penis weighs?  Would that be twig and berries?  Full or empty?  It’s a very small number compared to overall body weight and yet its presence preoccupies the male ego.

Underlying the significance of this obsession is the confusion about what “satisfies” a female.  Men have a release mechanism that tells them when they are finished but women… oh, no… it’s way more complicated than that.  The politically correct response about penis size emphasizes quality and not quantity.  Women can feel the difference in size, not only inside her but when it plops against her leg and when it stiffens in her hand.  Size is just one of many elements that create her experience.

The mythic big dick of fantasy is on a magical quest for a properly sized target.  It is a hand-in-glove fitting that should make women obsess about the size of their own vaginal endowment.  A survey of literature and science indicates that isn’t a real big concern.  It would be just as far out on a Bell curve for a woman’s vaginal capacity to be extremely tight or loose, short or long.  Women don’t talk as much about that because it doesn’t matter, not really.  That’s not how you measure the complicated workings of the sex-birth canal.

I will tell you this based on my research of the science and the literature: there is no reasonable way to increase the size of a penis.

There is some evidence you can change your attitude.

What is obvious in the literature is women’s desire to be gentle with the fact there is a real world impact-linked difference in their reaction to any object approaching and/or broaching their genitals.  There are so many words for what women feel when somebody insinuates something into them.  How wide is your tongue?  How long is your finger?  How big around is your thumb?  Do you worry about those numbers?

More important factors in sexual satisfaction include the level of honesty between couples discussing the physics of their love life.  If you can’t say you’d like to feel more meat then you’re unlikely to get to suggest there are products that could make any specific piece of meat feel bigger.  This means not only that she wants bigger but that she knows you may want to give her bigger.  You don’t have to be small to want to be bigger.

It doesn’t take much time to establish the actual parameters of your one and only penis.  Other than periodic rechecks, spend no more time assessing the size.  Really.  Work on your whole body’s significance to you and to others.  Women loathe a puny heart and dismiss a shriveled spirit but are adept at adapting to the cock at hand.  What women want is EFFORT, sincere and sex-specific courting.  For that you don’t need to bang a big woodie around.  You need confidence without boasting.

As an independent provider of high-end erotica in print and Kindle books, I promote a simple theme of sexual thoughtfulness.  Whether in a pothead’s quest for romance and reefer or the advice of a retired call girl now serving as a sexual consultant, there is variety, ingenuity, creativity.  That’s what readers want, it seems.  They like to hear their options.  They benefit from diversity in their fantasies.  Reading erotica gives specific fleshly details to collect like triggers; wicked words are hoarded as sexplosives to be detonated later.

I keep the tone light, the language frothy; there’s always a deep well of feelings available in any moment of a story.  It might be set as stark and sweaty, or rich and sweet, but you “see” the give and take. Sex positivity is an attitude, let’s say it together:  It’s all good.  [What, me worry?  Me no think so.]  There are facts of your life such as penis size and date of birth, don’t get hung up on those when presenting yourself for intimate consideration.  Put down that ruler so you have two hands free to offer what you do have.

Have a good time, all the time.  [This Is Spinal Tap]

In my books, the sexy vignettes tumble together so you can pick and choose, mix and match.  I present a kaleidoscope of frank sexuality and sly innuendo because I trust the reader to compose their own view.  Not suitable for some, appreciated by others means if you’re a queasy reader, pass on by.

This excerpt from Honey B., Sexual Consultant isn’t about size but it advocates a straightforward approach to sexual honesty in the interest of effective communication:

Bubba was a mother of a man.  Scary.  Born big, lived large.  I wasn’t sure my office suite was sturdy enough to contain him.  His wife Marletta brought him to me, desperate to find somebody besides her to tell Bubba his come did not taste good.  Making him come with her mouth wasn’t about flavor… it was about power surging. It was about him feeling good, her satisfaction achieved by causing it not experiencing it…  It wasn’t like intercourse which was its own reward; you give French, you don’t take it… it was only in the heat of the moment that she could accept his ejaculate in her mouth.  She couldn’t lick it up later; she couldn’t convince him that her refusal didn’t mean she didn’t love him.  Lots of women focus on the coming, not the cum.  He was wrecking an otherwise wonderful sex life with boyish demands that she savor his taste.  Marletta didn’t, and she couldn’t pretend she did.

If you think doctors and other traditional counselors would find this kind of information difficult to tell a person, multiply it by the Bubba factor.  Hundreds of pounds of male presence.  Bubba didn’t ask to be so tall, so broad, but he did wear his hair long and his boots black.  I could feel the heat when he realized what was going on.  He was furious that she told this personal information to me, a stranger.  “Oh, was she supposed to explain all this to someone they knew?”  This was their most private business and I was truly disinterested in their bedroom habits in general.  We talked specifically about what bothered her so much she thought such advice was needed.

Marletta knew Bubba could snap her like a twig, she also knew he wouldn’t.  If he would do something like that, he wouldn’t be Bubba.  His belief in love treated it like solace in a hostile world.  Love was who shared your bed and who spent your time.  It was his privilege to have Marletta to love.  That was the noble side of it.  In daily practice, Bubba was not getting the message from Marletta about sex details.  He clutched his erotic fetishes closely, he didn’t experiment or tolerate change well.  Within the limited scope of what he thought husbands and wife did together, he was comfortable.

Our first meeting had hinged on one question:  I asked Bubba, “If she isn’t eating you for the flavor, why is she eating you at all?”  He didn’t know… he wasn’t sure.  Maybe he ought to ask her.  More likely, she’d already told him but he hadn’t attached significance to that information.  Marletta liked the feel of him hardening, he knew that because she often started blowing him when he his penis was soft, letting it grow into her mouth.  He knew she reacted to his excitement, sometimes he never laid a finger on her and she got sharp-nippled and soft lipped just doing it to him.

I told them favorite blow job stories.  A junior executive working in a high rise building carefully locked his office door and closing the louvers for the “relight” window to the hallway… his wife knelt in front of him behind his desk and sucked him, window washers creaked into sight and caught them at it.  Or this one – impertinent man asks woman if she eats dick, she says sure, loves to, just get her a knife and fork.  She could eat a dozen in a day.  Did you hear about the singer who uses knowledge gained in classical singing class to control her throat so she can swallow the choral master’s cock?

If, on the other hand, you appreciate sexual candor then please click on through.

One thought on “Penis size is a fact, what matters is a judgment.”