Hempfest – Seattle — Aug. 16-18: Can’t get to the fest? Fire up a doob, read this potcentric sexotic fictional memoir.

All Hail the Hemp.  Just be cool with it.

If you can’t make it out to Hempfest this year, consider throwing some green at a potcentric sexotic fictional memoir written for the rowdier reader, in two volumes (so far): 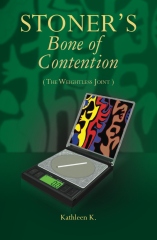 Stoner with a boner (It’s a Long Story) 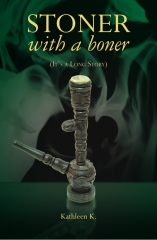 Stoner is witty, wise, and provocative in his quest for reefer and romance.  He’s decided to explore the abyss between men and women by diving in.

Written in a loose, free-wheeling prose that mimics the narrator’s lifestyle, the story glides from woman to woman and bong hit to bong hit without the burdens of plot or conflict.

There is not a mere gap between the genders, there is an abyss.

2.   anything profound, unfathomable, or infinite: the abyss of time.

a.   the primal chaos before Creation.

b.   the infernal regions; hell.

You have either been in the abyss or you have not.  You might have approached it, examined its edges, sniffed its presence, licked its periphery, but in fact you have either been taken into the abyss between ♂ ♀ or you have not.  Virgin or not.  We’ve held to that distinction in our life experiences for recorded history.  Then we invented all sorts of words to specify how far from virgin you become over time.

I loved her, I loved her spirit and her body and her attitude toward life, we always found a laugh and a sigh between us when we wanted to communicate beyond words.  She showed herself off to me, she stood naked before me for no other reason than she knew I liked to concentrate on the details of her shape and surface.  One night she handed me a tube of lipstick, a dark dull chocolate color that she had me apply to her nipples, instruct­ing me on how thick to apply it, how far beyond her areolas to make pronounced changes to her look.  She let it soak in for a few minutes, I then dabbed it off with a tissue, starting softly but rubbing roughly at the end so that the color that remained was locked into her skin, darkening the entire cap.  For me, her dark tips were an astounding aphrodisiac.

In health class we were taught that female nipples darken when nursing so baby-eyes can discern them against the paler skin of the breast.  It weirded me out back then to think about boobs working, about what they were for, beyond my boyish fascination that they were attached to breasts that grew on girls.

Nelly had always been generous with her bouncy bits, letting me lose myself in their weight and suck her nips hard and harder until she shuddered and squirmed.  With the centers so dark, her boobs took on a new prominence in the soft light, they were DIFFERENT and like most men I am entranced by DIFFERENT.  It’s the same reason I like to bind the breasts of my lover, to criss-cross ropes around and under her beauties so they jut out at a new angle, so the tips are under pressure.

When I rolled up on Nelly that night, I held myself up and away from her, entranced by her slutty knockers, smudged dark and deliberate, wanting to delay the first feel of her slit, knowing it would feel DIFFERENT.  She scooped her boobs together so I could see the throbbing pointers, the nubs seeming to solidify as I stared at them.  Unable to resist, I plunged inside with a single forward push, thrilled that she was wet and ready, that she strained forward to get me in deeper.  Breathy pleas for more and harder were answered by tattooing my needs inside her, making my mark, to her palpable satisfaction.  Inside, inside where she let me be, inside where her heart beat pulsed against my cock, inside where there was nothing between us, I pushed and pushed and pushed until I came, unloading the last drops of my joy.  Before I could withdraw, she put her fingers to her clit and came for me, clenching tight then quaking with aftershocks.

[Risk an investment in some dark lip stain and see if it works for you.]

The human dick is a bone of contention.  It can be the root cause of marital discord, romantic sputtering, and cyclical self-abuse.  It is a force, it houses energy, and it has presence.  It has the duty of perpetu­at­ing the human race by spewing spores.  It has that purpose but is not governed by the likelihood of success; it is the release of the spores, not their finding a target, that drives the dick.  In fact, when the spores are neutralized for conception by mechanical barrier, chemical suppression, or surgical intervention, many dicks happily shoot blanks.  Dicks are reckless drivers.  A dick will poke its head where it is not wanted.  Suffice it to say that what men do to their dicks in private reveals the relent­less nature of arousal and the energy required to combat it.  We spank that fucking monkey.

We’re not always good at expressing our sexual feelings, no matter how candid we are with the facts.  To explain what you need, why and when and where, reveals the yearning for context.  Sex should be carefree yet significant, unstructured and yet contained.  Men are trying to match their simple gear system to the mysterious hydraulics of women.  Our intellectual assignment of gender roles skips around the polarity between us; some of the differ­ence takes quantitative analysis.  Love|Sex is central to our behavior; we’re moved by instinct and encul­tura­tion.  We’re too quick to think we know what ticks inside our partners when we barely know our own triggers.  Sex disarms you… unless you’re part of the predator population in which case it is a weapon.  For most of us regular folk, the surrender of intercourse is complete and trusting, it is sharing and allowing and excusing the crazy ways our Sex|Joy busts out.

You do not have to be a smart man to love a smart woman:  you have to be a loving man.  I got smart enough to realize that trying to outsmart people is not smart.  I’m steady-on my mission to appreciate and meditate upon the complexity of people, specifically female people, and if it so happens that her brain works at twice the speed of mine then so be it.  There’s a probing that happens when smart people assess you, it’s nothing personal (which is why it’s uncomfortable).  You are examined through honed lenses; you may as well relax as they profile you.  It’s what they do.  It’s the smart thing to do.  I didn’t mind because I was curious myself as to their judgment.  If too smart for their own good, they dismissed others too quickly; I had my own sharpened talents available to the ones who knew how to spot me.

I wasn’t anybody’s Jethro, I didn’t dumb down by any means.  I wasn’t interested in being associated with problems, any kind of problems, the whole point was to link up, slink along, see if our charges attracted or repelled.  Cool.  Easy.  Kind.  Specific.  I like to keep carnal things well-defined, to heighten the expectations between us thereby allowing other barriers to fall.

I wasn’t a bully or a braggart; I wasn’t hiding a secret life.  I made a free and clear offer to meet face first, body to follow.  You were welcome to decline but if you considered accepting then we negotiated the limits.  It wasn’t a formula, not really.  I didn’t waste time shooting at scampering targets, this wasn’t ambush style for me, not as a grown man with a sincere desire to connect.  I could be a good companion to a woman who was ready to be herself:  either reclaimed from a bad relation­ship through time and self-assessment or naturally clear-headed on matters of excitement and desire.  We were going to get crazy together and for that we needed a solid foundation.

Like smoking the pot, some do and some don’t.  I’m not here to change their minds, just to assess which part of the playground is theirs.

The War on Pot is all but over, the stoners ignored the law and waited it out, and now it’s all about the paperwork, how much can you have, where can you get it?  It’ll be a few more years before you can buy a pack of reef at the liquor store.  I appreciate the laid-back law enforcement:  keep focus on the meth labs and pill factories.  The joke is that the only increase in legalized pot use will be old hippies who haven’t been able to buy a lid since 1978… the rest of us have been using an efficient commercial supply chain all these years.

“What did you hear?”

The definition of work:  paid to do what you would not do voluntarily in order to fund what it is you DO want to do.